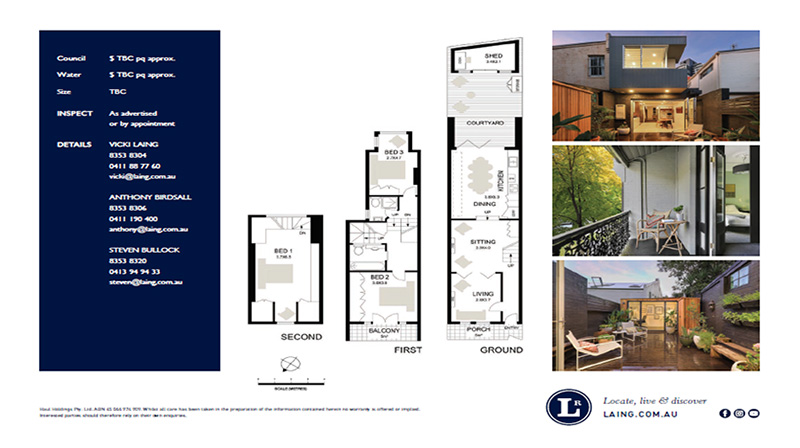 Project : A long-time friend of mine purchased an unrenovated terrace in a desirable street and wished to modernise the house whilst retaining its original charm.

Along with most terrace house renovations the same problems exist; the kitchen, bathroom and laundry block off any access to the little bit of open space at the rear, and in this case it could only be reached through a tortuous , narrow side path. The goal was to relocate those functions deeper into the building to open up the space and to reclaim some of the side area, as it was particularly narrow.

We made the decision to restore the front rooms to their original state and to create a light-filled open space at the rear that would open directly to the rear garden and patio. The challenge here was how to get past the heritage division in at Council, as we were hoping to extend the rear first floor section by cantilevering it over the large bifolds in the Dining area. The issue being that this terrace and its neighbours had a pristine set of original rear skillion extensions that Council and were keen to retain that rhythm. To that regard we had to prepare a set of diagrams showing how the original brick form is retained even with the addition of a lightweight addition that extended the Second Bedroom to a point where it became useful.

We added the dormer and rear roof extension to create an attic with great views over the neighbourhood by following the Council regulations. However the room was a little shy of head space and so we went back to Council once the Approval was granted and asked to lift the roof a little higher, something they specifically warn against and typically don’t allow. In conjunction with a Heritage Architect we argued that the current roof was probably a rebuild of the original looking at the abnormally large parapets and existing flashing lines, and that in fact, we would be restoring the original roof. This was met with a positive response by Council and so the Attic now had reasonable head height to make it a room that could be easily used as a third Bedroom or another Living Room